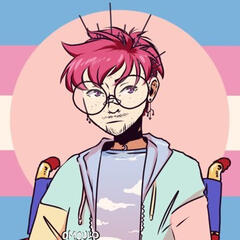 Ask to follow if you're cishet, neurotypical, NSFW, under 15, or if you know me irl

Bold and italics = no doubles/I'm uncomfortable with doubles
Bold: Past lives
Italics: I am these things
Underline: Fictionkin

-Self Harm
-Suicide
-Rape
-NCCSA/COCSA/CSA
-Treating me as dumb for being slow to understand something or treating me like a child because I'm neurodivergent
-Emesis
-Super dirty things, mold (I have mysophobia)
-Cigarette smoke
-Parental abuse
-Omegle
-Hetalia
-Car crashes
-Thinspo/Body checks
-Incest
-Yelling
-Vagueposting about me
-Melanie Martinez's Crybaby album/anything mentioning hate towards her old fans who got uncomfortable after the Timothy Heller situation
-GRLwood
-The ship Mikan x Junko
-Things said to me in a romantic/sexual context if you're not my partner
-Pan vs Bi discourse
-Discourse debating whether my gender identities are real or not
-Being told I'm delusional for being otherkin (that's a whole ass rant for later)
-Being referred to as human
-Unus Annus hate
-Mikan Tsumiki and Gonta Gokuhara hate
-Markiplier hate

Please tag with eli don't look or trigger tag it

My primary pronouns are He/Him/His and Bug/Bugs/Bugself

My Identities
Transmasc - Female to male trans masculine
Gendervague - Neurodiversity affecting perception of gender, often paired with a vague feeling that a gender is supposed to be there, but you cannot pinpoint what it is.
Non-Binary - Identifying outside the gender binary, neither male nor female
Biromantic - Romantic attraction to two or more genders, in my case I like boys and non binary people
Asexual-flux - Does not experience sexual attraction, but it can fluctuate throughout the day/week/month/year
Angelgender - My gender feels ethereal and angelic
Ghostgender - I feel disconnected from humans and my gender feels really floaty and invisible.
Nebulatrans - I definitely know that I'm not cisgender, but due to neurodivergency, finding a label ID is very difficult and I may or may not collect or coin different or multiple terms to describe how I feel
Enboy - Male aligned non binary person, or someone who considers myself to be a non binary boy
Enbug - Similar to enboy, however made to fit my bug/bugself pronouns. Can be used to describe your gender feeling buglike or similar to bugs. (Mine being moths in this case)
Bug-gender - A gender relating to/is bugs
Mothgender - When your gender is moths or related to moths
Tenebraic - To feel vaguely one identity while also feeling vaguely nonbinary, yet you don't quite feel comfortable with either option.
Arundogender - A gender that is tied to the image of angels.
Neuroaromantic - Feeling romantic attraction or wanting to participate in actions associated with romantic attraction, but you are scared of, repulsed by, or averse to them due to being (or relating to being) neuroatypical, neurodiverse, or mentally ill.
Coexta - A vague, inconsistent relationship with gender

Note: My gender changes due to my autism, the environment that I'm in, and my kins/kintypes

I am 17 years old
I am disabled and queer
I am white
I am a pagan witch and I worship Hades, Hekate, Dionysus, and Persephone
My special interests are Danganronpa, Stardew Valley, Monster High, Taxidermy, Teeth, Reptiles, Bugs, and Creepy Stuff.
I can reclaim the r slur, cripple, and the f slur.
I will not censor the word "Queer" or any variation of it because I see it as my identity.

-I support neopronouns, xenogenders, and any other MOGAI identities
-I do not believe in the rule of three, and am perfectly fine with hexing/jinxing/cursing someone if they deserve it
-I do not tag my special interests besides creepy stuff, teeth, taxidermy, bugs, and reptiles. If you need something tagged please dm me
-I believe that pronouns do NOT equal gender
-I do not talk on lesbian discourse because I am not a lesbian
-I am asexual and believe that all aspec people are lgbtq+
-Tag any of my triggers as Elijah Don't Look
-I post a lot about my mental health
-I need tone indicators
-I am 17, and do not want anyone under 14 following me, the only people under 14 allowed to follow me are irl friends or the partners of irl friends, otherwise please do not follow me. This will change to 15+ as I get older.